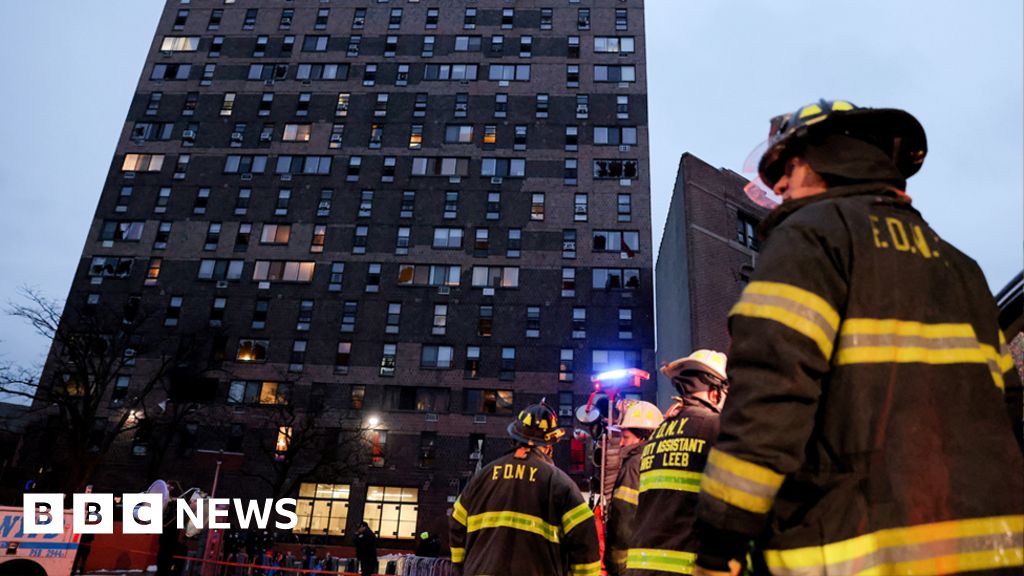 There were nine children among the fatalities in the fire, which took hold on Sunday in the Bronx.
www.bbc.com

Some 200 firefighters were sent to tackle the blaze, which officials believe was sparked by a malfunctioning electric heater.
Commissioner Nigro said there were two floors of fire, but the smoke had spread everywhere.

The door to the apartment where the fire started was left open, and smoke then spread to every floor [19 stories], Commissioner Nigro told reporters.
"Members found victims on every floor in stairwells and were taking them out in cardiac and respiratory arrest," he said.
In a virtual news conference on Monday, Andrew Ansbro, the president of the firefighters' union, said the building was "well-known in that area, for having difficult fires", noting that its fire protection rules with regard to sprinklers and self-closing doors may have been different from those of the city.
He claimed it was because the building had previously received federal subsidies and therefore was not required to follow the same fire codes.

Yikes said:
He claimed it was because the building had previously received federal subsidies and therefore was not required to follow the same fire codes.
Click to expand...

There was a period when the federal government owned, funded, designed, built and operated some affordable housing (in addition to military housing, etc.). If that was the case here, it may never have been plan-checked by a local jurisdiction, but rather by the federal GSA or their predecessor agency, according to whatever code or internal regulation they preferred at the time.

I know of at least one apartment development in a So Cal desert community that started its life in the 1940s as military housing, then was deemed surplus land and was eventually came under the jurisdiction of a local municipality as affordable housing. There are no records of any building permits, nor anything that would indicate an applicable code. There's just an underlying assumption that the buildings legally existed as-is.

That is an ugly building. Looks like they used whatever brick was available from Habitat Restore.

Federal Government Owned land and building I can see it being built without any local authority having any say in the codes used. Similar to a post office. I have 2 in my jurisdiction one is a leased building and they come through us for permits. The other is federally owned and we have nothing to do with the construction of it.
You must log in or register to reply here.
Share:
Facebook Twitter Reddit Pinterest Tumblr WhatsApp Email Share Link
Top