A Corridor by any other name

This discussion has been placed elsewhere on this site but I want to discuss it further. When are you able to define something as an "intervening room" vs. a corridor? Even when a rated corridor would not be required, it is often my firm will use terms other than corridor (Hallway, Alcove, etc.) to define spaces that would otherwise be corridors but to avoid the "trigger word" which will lead to additional scrutiny at code review.

Looking through the code and commentary there's a couple of items to note:
Corridor - an enclosed path defines a path of egress travel. (The commentary goes on to state "enclosed" is not fully defined but limits the "senses" to areas outside the path, aka full height walls).
Corridor rating - discussed in IBC 1020.1 (IBC 2015), when lower than table 1020.1 or a "0" in the chart, it is unrated, and can be open to intervening rooms.

This "hallway" is within an A-2 Building serving 2 toilet rooms and the kitchen. The Dining space (to the right) uses the toilet rooms but does not use the "hallway" for egress. The kitchen does, but has a total load of only 10 people, only 3 of which would be using this door (if evenly distributed to other exits). Note that all areas fall within the required common path of travel for single exits from the toilet room or kitchen space. The dinning room has two exits (not shown).

A few items/questions:
1) This fails the duck test. It looks like a corridor, so is it a corridor? Does calling it something other than a "corridor" make it an intervening space?
2) The whole building occupancy is 99. The toilet rooms themselves (by code) have 0 occupant load. If it were a corridor I'd assume it would only serve the 3 people from the kitchen, correct? (or would it serve all ten?)
3). For multi-stall bathrooms (not shown), for load calculations there are 0 occupants as it's excluded from "net" calcs. But what "load" is using a dead-end corridor to a 31 toilet bathroom?
4) For the situation above (ignoring 3) this would fall under a "non-rated" corridor (were it to be called one) and I believe and could use the intervening room as part of the egress route. (Per code commentary for 1020.6) and would not need separation doors either). Is it better to call it a non-rated corridor or just call it "hallway,alcove, etc?" (ignore previous associated code terms which have been dropped).
5) Does serving the dining space have any impact on this "hallway" space? Do dead end requirements apply, etc? The commentary seems to say the served area uses the corridor for egress, and that's not the case except for the kitchen/toilet rooms mentioned.

Any thing else to add?
F

Corridor does not kick in till the occupant load hits,,, what the table says 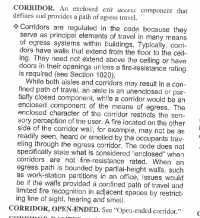 Yes, you copied the commentary. I have access to that. The "Open ended corridor" and the "non-rated corridor" open to an intermediate space are not the same thing (rated corridors can't be to intermediately spaces (with a few exceptions for foyers, etc.). Not sure what the point was?

Good one Paul, your key word is "circulation", what does it connect too, is the building sprinklered, is the alcove, reception open to the corridor and if so is it of the same rating (or exempted by sprinklers)?

Call it what you will in your attempt to circumvent ratings but if entering it (hallway, alcove, transition, etc.) will it ultimately connect to an exit? Connect the dots.

fungineer said:
Yes, you copied the commentary. I have access to that. The "Open ended corridor" and the "non-rated corridor" open to an intermediate space are not the same thing (rated corridors can't be to intermediately spaces (with a few exceptions for foyers, etc.). Not sure what the point was?
Click to expand...

My opinion, it is not a corridor nor does it need to be rated.

If it was 10 ft wide the discussion would probably go away.

A corridor is the hallway in the motel the running the leght of the building and the rented rooms are off that. Likewise in an office building with separate office suites or and apartment complex whit separate spaces located down the corridor to the exit access stairs or doors.
C

Did not ask the OP if there was a fire sprinkler system??

Corridor provisions to not start till you hit the table requirements

What is the space on the right of your plan that the "Hallway" opens into? Since this is less than 20 ft. it could probably be considered part of that space. Is the "Hallway" designation to identify it for the finish schedule?
F

Paul Sweet said:
What is the space on the right of your plan that the "Hallway" opens into? Since this is less than 20 ft. it could probably be considered part of that space. Is the "Hallway" designation to identify it for the finish schedule?
Click to expand...

The area on the right is the dinning room for the restaurant. The "hallway" designation is to make scheduling easier (heights, finishes, etc.)
F

Yes it does, and in most occupancies it will say the minimum width for the path of egress is per population (but not less than that for corridors) so whether or not is a corridor doesn't really matter for that.
F

To summarize what I get here, because the code provisions don't apply, whether I consider it a "non-rated corridor" or a "room" won't make a difference, as it will qualify either way. (by the way this was not sprinklered).

** Where it gets tricky for a rule of thumb is when the "room" has a length greater than 2.5 time the depth (as it would then not meet the exception under the dead-end corridor restrictions, were it to be considered a corridor). The commentary is clear that the corridor section is not designed to "require" corridors, but if provided then they must meet those restrictions.

Which gets me back in a circle.
1. If a "room or space" is longer (ignore example in OP) then the dead end restriction, but it isn't labeled a "corridor" and the "room or space" doesn't need to be rated (were it labeled "corridor"). Does it matter if the egress distance / path of travel works?

2. Previously I asked the question about multiple person toilet rooms (assume 30+ in theory). In an A-2 building, what's the occupancy to those toilet rooms, 0, 30, match the adjacent space?
A