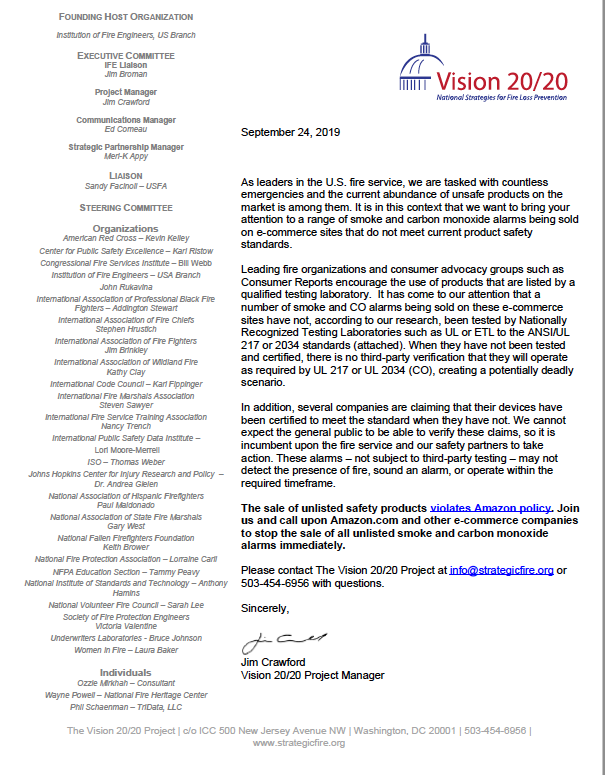 It was brought to The Vision 20/20 Project’s attention by a smoke alarm manufacturer that there were smoke and CO alarms being sold on Amazon that had not undergone third-party testing to determine if they met the requirements of UL 217 Standard for Smoke Alarms or UL 2034 Standard for Single and Multiple Station Carbon Monoxide Alarms. In response, The Vision 20/20 Project is publishing a letter asking the fire safety community to call upon Amazon and other online retailers to stop this practice. You can download the letter, along with a list of smoke and CO alarms identified by the smoke alarm manufacturer, by clicking here.https://strategicfire.org/wp-conten...0-unlisted-smoke-alarm-letter-09.24.19pdf.pdf
C

In California smoke and co alarms must bear a state fire marshal seal.

I just moved this thread to the top where it should be. It appears as though Amazon has pulled a lot of these but that does not mean others have them in stock and are still using them.

Sometimes the CSFM labels are fake

I didn't know.....I suppose I should have. As Tommy (the oldest Henderson boy) said, "Here's the thing about that", Rarely do I remove a smoke alarm from the wall or ceiling. I can't reach most of them without a dining room chair.

We require smoke and co alarms with every permit no matter what it is.....plumbing, mechanical, electrical, building.....every permit. I spend an inordinate amount of time on smoke alarms. We provide a flyer when we issue the permit that explains where to install the alarms. Contractors never mention this to the owners.

A simple two trip permit turns into five or more trips. Take a re-roof for example. There's a sheathing and final inspection required. At inspection the owner isn't there so I can't get in. I leave a notice asking to get in and a flyer. Another inspection is requested and I find the alarms on the kitchen counter. I come back a fourth time and the alarms are installed incorrectly.

Forget about hard wiring/interconnecting unless the ceiling was torn out or the dwelling was rewired. If the alarms are installed at the first attempt to inspect them....it passes whether they are installed right or wrong, the assumption being that they were existing nonconforming. Ya that sounds wrong right. It's AHJ policy.

Were it up to me, I would be satisfied with the method chosen by LA City. LA City gets a notarized document signed by the owner that there are code compliant alarms. That's a change from how I felt about this years ago. I have seen the affidavit posted on several of my jobs. The contractor took a chance that I would be okay with it. I wasn't and when I did get in, there was no alarms.

Years later I have become a smoke alarm inspector. I am tired of hearing the derision from owners. If they will not take the simple step of installing alarms, who am I to force them? Not only would I accept a notarized affidavit, it should be mandatory, I don't inspect them......you promise that you have them. Many of the people won't know what they are signing because English is not their language. Maybe there should be pictures.....wait a minute.....the flyer that I created has pictures......that had no effect.

An inspector [since retired] that I know would start every inspection with the smoke alarms. If the alarms failed inspection, the inspection stopped. If the inspection stopped so did the work or perhaps the final payment. That former inspector got away with it because he is a jerk and the office manager was afraid of him. I can satisfy the jerk component but nobody fears me.
Last edited: Oct 14, 2019

but nobody fears me.

I bet you’re like my neighbors dog, an english mastiff. Big dog ... huge. Bark that rattles windows. But once you rub her tummy she is friendly as an old spinster aunt with thick red lipstick.

We use an affidavit for the smoke/CO alarms that the property owner has to sign. Ours doesn't have pictures, but it clearly explains the location and listing requirements. It also clearly pins the liability and responsibility on the property owner, not the contractor, and definitely not the tenant. With Covid we have made the affidavit required as part of the paperwork for every permit, a practice I truly hope we keep in place permanently.
You must log in or register to reply here.
Share:
Facebook Twitter Reddit Pinterest Tumblr WhatsApp Email Share Link
Top