408.6 Shower Compartments. Shower compartments, regardless of shape, shall have a minimum finished interior
1024 square inches and shall also be capable of encompassing a 30 inch circle. The minimum required area and dimensions shall be measured at a height equal to the top of the threshold and a point tangent to its center-line. The area and dimensions shall be maintained to a point of not less than 70 inches above the shower drain outlet with no protrusions other than the fixture valve or valves, shower heads, soap dishes, shelves, and safety grab bars, or rails. Fold-down seats in accessible shower stalls shall be permitted to protrude into the 30 inch circle.

Exception #2
The minimum required area and dimension shall not apply for a shower receptor having overall dimensions of not less than 30 inches (762 mm) in width and 60 inches (1524 mm) in length.

The argument being made is that because the manufacturer lists this shower as 30"x60", exception #2 applies. The word overall in reference to the receptor is key. If the inside of the receptor were in fact 30"x60" there would not be an issue as the compartment would by default meet code. Hence the assumption that the outer dimension is the "overall". I suppose that one would then be required to measure to the outer edged of the back wall of the enclosure.

However, It seems odd that the exception exists at all. 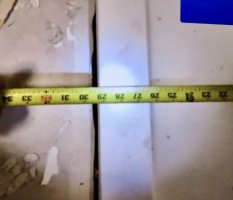 This is a prefabricated fiberglass one piece shower compartment. One of our engineers theorized that the exception is a nod to the replacement of bathtubs with showers in the same space.
Last edited: Nov 20, 2020
A

ICE said:
This is a prefabricated fiberglass one piece shower compartment. One of our engineers theorized that the exception is a nod to the replacement of bathtubs with showers in the same space.
Click to expand...